Collective myths and the challenge of organizational transformation

Why is an organization so difficult to transform? The issue continues to challenge the senior management of many large organizations. In large part, the difficulty comes from the fact that what makes an organization unique, that it is a social artifact (a collectively shared artificial object), is not recognized. Viewing an organization from this angle, rather than as a machine or a node of contracts, opens up an interesting avenue and provides the missing key to transformation.

An organization is a social artifact. What does that mean? An artifact is an artificial creation, something that does not exist in the state of nature. As Herbert Simon observed in his book The sciences of the artificial, most of what we have around us and what surrounds us is artificial. Even a cultivated field is something artificial, created by Man.

Humans are not the only ones building artifacts. Animals such as bees and ants also do. But what is really specific to Man is the social artifact: it is an abstract construction that exists only through the beliefs of those who adhere to it. An organization is a typical example of a social artifact. Here again, animals are also able to organize themselves to function collectively: this can be done in a relatively simple way, and can work on a very large scale, such as with ants or bees, or in a more complex way but work on a smaller scale, such as with monkeys or elephants, and for that to work, the animals have to know each other. But human beings are the only ones who can create sophisticated societies on a very large scale with people they don’t know. This is what explains Yuval Noah Harari in his remarkable book Sapiens. According to Harari, this ability explains Man’s domination of the animal world. Against a mammoth, a man has no chance. But against ten men who know how to organize themselves for hunting, it is the mammoth that no longer has a chance. And ten mammoths against ten men will not stand a chance either, because ten mammoths remain ten individuals, while ten men form a coordinated, unbeatable group. And if ten men are not enough, next time, it will be a hundred men, or even a thousand if necessary, who will come and be organized. And we’ll call it an army.

Harari’s question then is: what allows man to create and operate complex groups? His answer is fascinating: it is the ability to create a collective fiction (which he also calls myth). He adds: “To establish complex organizations, it is necessary to convince strangers to cooperate with each other. This will only happen if these strangers believe in shared myths.” 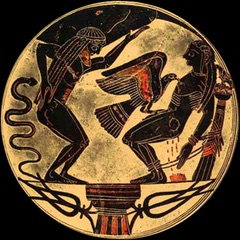 A myth is a set of beliefs, idealized representations around a character, a phenomenon, a historical event, a technique and which give them a particular strength and importance. A religion is a myth, a $20 note is also a myth. It has value only because a large group of people believe the same thing about the small piece of paper.

An organization is the most complete form of collective myth. It is sometimes idealized around its founder and built from historical events such as successes, failures, disasters, and a technology, such as the automobile and Ford’s assembly line. In particular, the myth of a particular company is based on a mental model of reality that corresponds its business model. All this reflects the way in which the company sees itself as the way to interact with its environment, which is accepted by all the stakeholders involved. Our reality, unlike that of animals, is therefore essentially a reality of artifacts, and in particular social artifacts, i.e. of collective myths or mental models about the world or parts of it.

How can a very large number of people come to believe in shared myths? In the economic sphere, it is often the result of the action of entrepreneurs. Entrepreneurs do not passively wait for markets to emerge and events to occur. They do not subscribe to dominant beliefs. They do not see the environment as it is, but as it could be, or more precisely, as they would like it to be. To a dominant myth, entrepreneurs oppose an alternative myth that they gradually build and strive to make real, acting as active transformers of their environment. And this transformation is achieved through the creation of social artifacts: products, markets and of course organizations. Elon Musk’s action in space is typical of this creation of alternative myth: “we can send people to Mars and they can live happily thereafter”.

An organization is therefore an extremely sophisticated object. It is much more than a sum of contracts, themselves good examples of social artifacts. It is a complex set of myths or mental models in which a large number of stakeholders believe, and this belief is the condition for its functioning and sustainability.

The Challenge of Transformation

This is also why it is difficult to transform. Harari notes that to change an existing mental model, we must first believe in an alternative mental model that we must create.

The difficulty of transformation therefore lies mainly in this conflict and its resolution is difficult. But one thing is certain: the starting point for any transformation is the identification and characterization of the organization’s current mental models. These individual and collective models provide the necessary entry points into the system to be able to change it.

2 responses to “Collective myths and the challenge of organizational transformation”